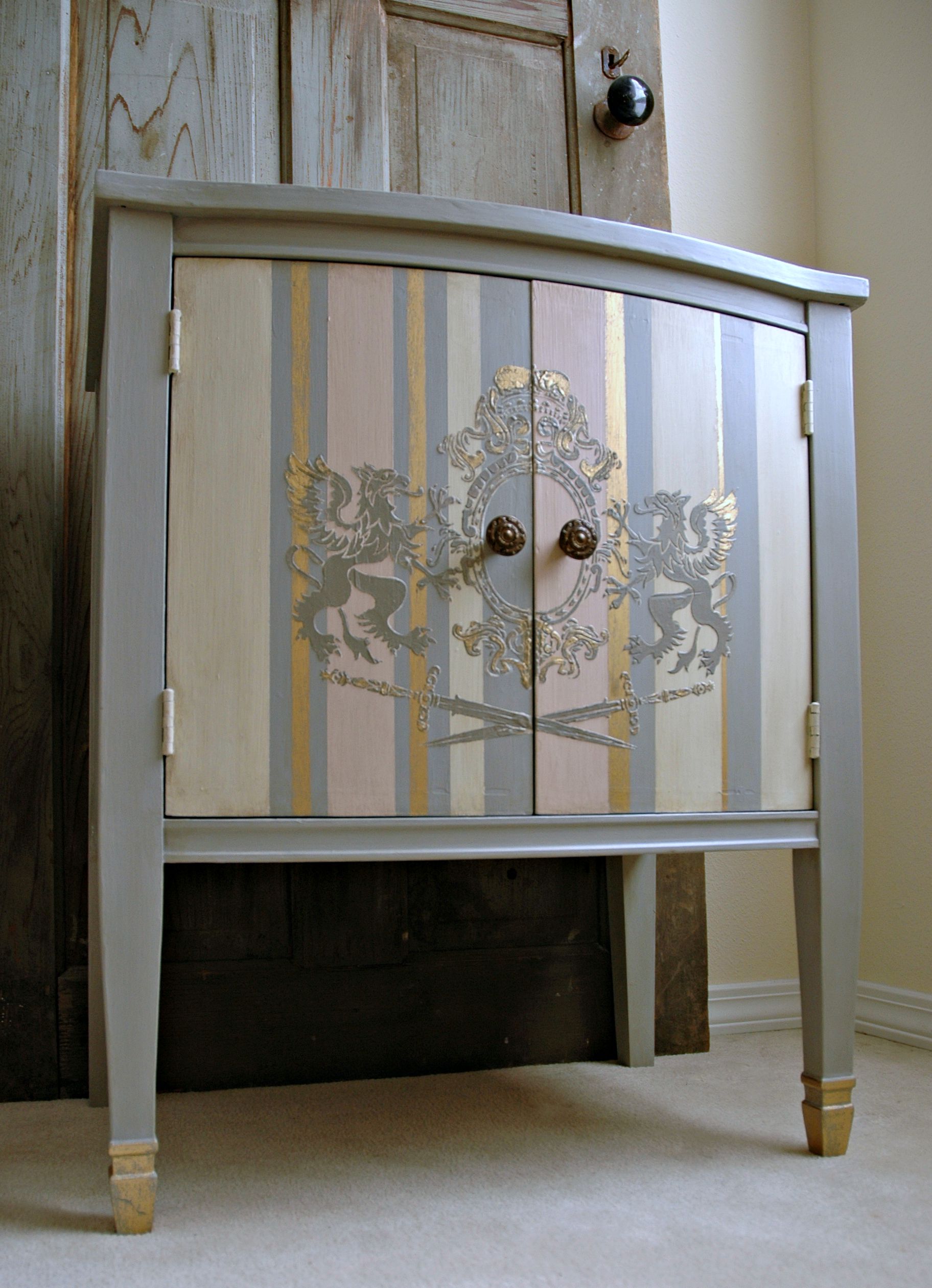 Now and then a piece of furniture comes along with great bones but zero personality. We like to think of these pieces as a blank canvas, the perfect subject for an artistic makeover. They need something with a little more dimension and design, something above and beyond a paint makeover. That’s where Artisan Enhancements products really come into play, by taking the paint finish to the next level!

Follow along as we share the products and techniques used to transform this bland flea market find into a show stopping statement piece!

To begin with, the cabinet doors were removed and the entire piece was painted in Paris Grey. Next, the doors were taped off in a random striped pattern and stripes were painted with varying widths in Old White and Antoinette. Once the paint had dried completely, a Scumble glaze was applied to give the paint finish more dimension. Scumble is a tintable glaze and in this case it was mixed 5 parts Scumble to 1 part French Linen. The mixture was applied with a brush and then wiped back with a damp sea sponge. Because Scumble has an open time of 15-20 minutes, you have ample time to work with it and achieve the look you want before it dries. Once the Scumble Glaze was dry, we taped off a few more stripes.

Artisan Enhancements Leaf & Foil Size was brushed over these thinner stripes and allowed 20 minutes to tack up. We then applied the Soft Gold Foil, shiny side up over those areas where the Leaf & Foil Size had been applied and used a stencil brush to burnish the foil into the size. When the tape was lifted, we had nice, crisp metallic gold stripes. You may be wondering why we didn’t apply the metallic stripes when we were taping off and painting the first set of stripes. Had we applied the foil stripes prior to the Scumble Glaze, the French Linen glaze would have dulled and muted the metallic effect, and we wanted it to shine! Our Griffins stencil was a perfect fit for these cabinet doors given it’s size and symmetry. With the drawers lined up on a flat surface, the stencil was taped into place. We used our Color Shaper tool to apply a thin, even layer of VP Antico across the top of the stencil. While the VP Antico was still wet, the stencil was carefully removed. The doors were separated and the little bit of VP Antico that had lapped over the spot where the two doors meet, was easily wiped away with a damp cloth creating two, symmetrical designs that would line up to make one when the doors were closed. After a few hours, the VP Antico was completely dry and the design was ready to be further enhanced. We laid the stencil back down and went over it with French Linen, using the medium stencil brush. Next, we used a small brush to apply Leaf & Foil Size to a few more places in the design, including the crown, the griffin’s wing tips and the handles of the swords. The Soft Gold Foil was applied shiny side up to these areas after allowing the Size to tack up for 20 minutes. Once again a stencil brushed was used to burnish the foil and then the foil was removed to reveal the gold highlights on the stencil relief design. Two coats of Clear Topcoat Sealer were applied, allowing 24 hours of dry time between coats. These were applied using the topcoat brush, designed to get a smooth, even, thin coat of sealer each time. The cabinet doors were then hung back into place and the pulls reinstalled. A once dull and lifeless little cabinet now has a regal, artistic finish! With a little imagination and the right art finishing products and tools, any number of beautiful paint finishes can be achieved! What will you create?

We hope you’ll share your next Artisan Enhancements inspired project with us!

Be sure to hashtag #artisanenhancements in any social media posts featuring your creations! 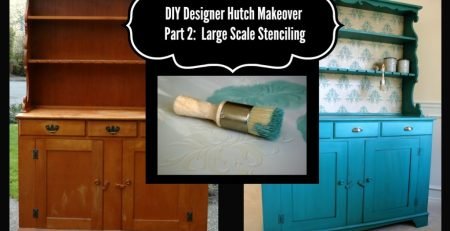 Anytime we have a large back panel on a hutch or bookcase that can be easily removed, we see it... read more 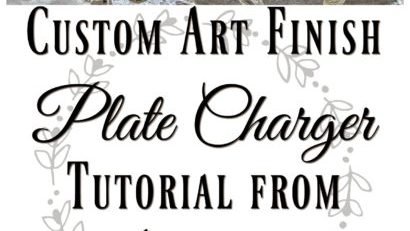 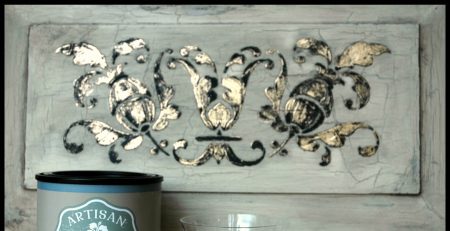 Add Depth and Dimension to Paint Finishes with Scumble!

Applying a Scumble glaze to your cabinetry, furniture or walls adds depth, dimension and a custom look to your paint... read more 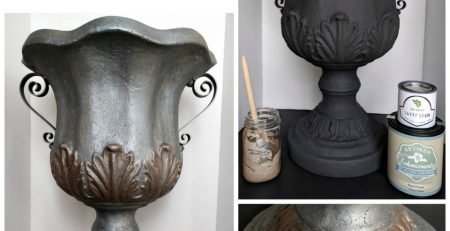 This unique plaster urn was just crying out for an elegant new look. We were on a mission to play... read more

In our last blog post, we featured one of our favorite Artisans and Blogger, Girl In Pink As part of... read more 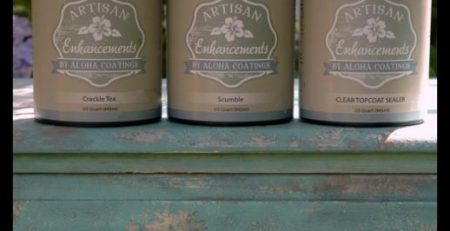 Those who are familiar with our products know that Crackle Tex can not only create dramatic weathered crackled paint finishes... read more 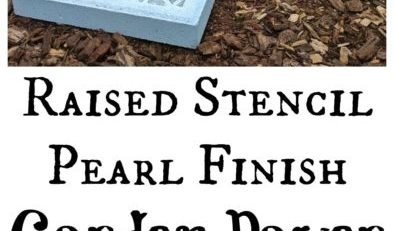 Fine Stone by Artisan Enhancements is an exterior grade plaster product with added aggregate used to produce stone-like textures. In this... read more 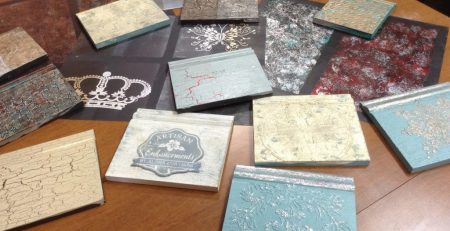 Total Homes, a family business that opened just over a year ago in Corpus Christi, TX strives to offer their... read more 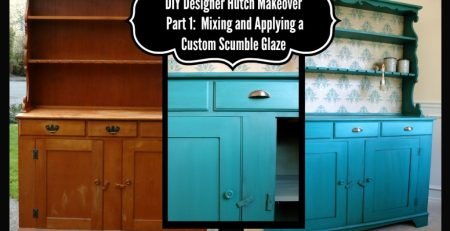 In part 1 of this two part series, we are going to take you through the process of creating and... read more 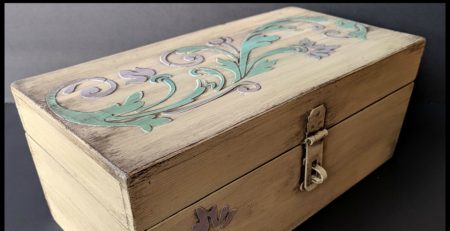 Artists and faux finishers are raving about the new line of stains from Bio Savvy Brands! Our wood stains penetrate... read more

HAPPY EARTH DAY!! 🌎🌿 Here at Artisan Enhancements™ we strive to treat every day like it’s Earth Day. Our products are bio-sustainable and environmentally friendly for a cleaner, greener future.

Artisan Enhancements Clear Topcoat Sealer can range from matte to satin in sheen. However, showcasing the sheen of Clear Topcoat Sealer in a photo can be tricky. The lighting and angles have to be just right. Artisan @ciaobellafurniture managed to capture the velvety satin sheen on this beauty! So smooth ! Bravo! ...

Let’s get crackin’! Artisan Enhancements™ Crackle Tex is a thick bodied crackle medium. Crackle Tex was developed to reproduce the look of aged, weathered paint and plaster. Crackle Tex can be used to achieve both delicate subtle crackle and chunky chipped effects. Great for multi-layered, textured and dimensional finishes! ...

We love the colors and layers of this artwork ...

We're feeling refreshed, renewed, and revitalized! Have you seen our new look yet? Visit artisanenhancements.com to learn more and find your local retailer! ...

Custom color glazes can be created by adding ...

Feeling a bit like Goldilocks when it comes to ...

Feeling a bit like Goldilocks when it comes to product sizes? Too much product? Too little product? If you answered YES, our new 16 oz. (pint) size may be just right! All Artisan Enhancements and Nature’s Wood Stains products are now available in 16 oz. (473ml). ...

New Premium Round Brushes! The new Artisan Enhancements™ Round brush is available in two sizes – Small (25mm) and Large (37mm). Our round brushes are constructed with medium-firm stiffness bristles. The perfect tool for applying texture mediums, plasters, paint, and waxes! ...

We love this Old World wall technique created by ...

We've been revisiting some of our favorite ...

Our #1 selling product is our uniquely formulated ...